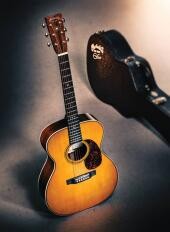 Fender, Gibson, Martin, and other big-name guitar manufacturers have launched signature guitars for Eric Clapton. The Eric Clapton Crossroads guitars launched in March this year are historical because this is the first time the three companies have jointly launched the Eric Clapton signature guitar at the same time. Eric Clapton Crossroads Guitar Collection brings together five different guitars, and their inspiration comes from the most important guitars in Clapton's career. The Fender Custom Shop accurately engraved the 1956 Fender Stratocaster guitar, "Brownie." Gibson launched the cherry red 1957 Gibson Les Paul, named "Lucy," which also belongs to George Harrison. Martin has introduced three new guitars: the Martin 00028EC "Crossroad" Madagascar rosewood version and two Martim 000-45EC "Crossroad" guitars. These two guitars' back and side panels are available in Madagascar rosewood or Brazilian rosewood. These five guitars are all limited production. Among them, "Brownie" Stratocaster and "Lucy" Les Paul are limited to 100 globally. The Martin 000-28EC is limited to 150 pieces. In comparison, the Madagascar rosewood side and back panel of the Martin 000-45EC guitar will be launched with 55 pieces, and the Brazilian rosewood side and back panel of the Martin 00045EC guitar will be launched. 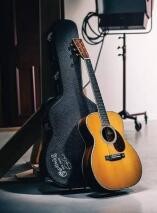 Eric Clapton is the most influential and popular use of the Fener Stratocaster, Gibson Les Paul, and Martin 000 string flattop acoustic guitars. This is one of the reasons why the world's three largest guitar companies have joined forces to support him. Respecting the career and contributions of Eric Clapton, these special guitars are meticulous in detail and craftsmanship, representing the best of Fender, Gibson, and Martin shortly. I believe that even if you don't use Eric Clapton's Custom Shop guitar, these guitars will satisfy any guitarist.

Few guitars have a pure "rock star lineage" like the 1957 Les Paul, and they are still so fascinating after being repainted at the factory. The other name for this guitar is "Lucy." The guitar belonged to The Lovin' Spoonful's John Sebastian before the Eri Clapton, then Rick Derringer, and finally, in 1968, Clapton purchased the guitar at the Dan Armstrong store in Manhattan. In August 1968, Clapton gave the guitar to George Harrison, which means that Eric Clapton only owned the guitar for a short time. This guitar was used by Harrison as the main guitar for recording "White Album" and "Let It Be" and was used frequently during his solo career. And this Harrison-Clapton "Lucy" Les Paul guitar, Gibson painstakingly reproduces every detail of the original "Lucy" guitar based on existing conditions. The guitar has a slim neck profile, and Gibson re-enacted it after the body was polished in the 1960s. 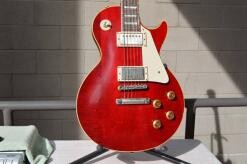 Regarding pickups, the retro-style PAF pickup provides the guitar warmth and harmony, while the bridge's dual-coil pickup provides impressive impact and aggressiveness. Gibson uses lighter mahogany to match the weight of the original guitar as much as possible. The guitar comes with an autographed certificate by Eric Clapton, a recent interview with Eric Clapton about his various Les Paul guitars, and the original "Lucy" guitar, a re-recorded 180g vinyl version of The Beatles. White Album and a replica of the hard case. Like the "Brownie" Strat guitar, this "Lucy" Les Paul is not only of special value to guitarists; it is a unique, iconic retro-style Les Paul guitar. It comes in comparison to the original retro guitar. Said that this guitar has a lower price.

In the mid to late 70s, Eric Clapton's favorite acoustic guitar for performances or recordings was the 1974 Martin 000-28 guitar, which you can see in many of the photos and video clips of the time, including the BBC's Old Grey Whistle Test. In the documentary "Eric Clapton and His Rolling Hotel," Clapton also used this guitar to create many great pieces, such as "Wonderful Tonight." However, Martin's first Eric Clapton signature guitar is 000-42. But the second Martin Eric Clapton signature guitar 000-28EC, introduced in 1996, became one of Martin's best-selling guitars and is still in production today. In addition to limited production, the Martin 000-28EC "Crossroads" guitar has several significant differences from the popular 000-28EC. The "Crossroads" guitar includes exclusive configurations, including Madagascar rosewood back and side panels (instead of Indian rosewood). Style 42 snowflake grade mark (not diamond and square) and the crossroad symbol of the head made of mother-of-pearl. Like other Eric Clapton signature Martin guitars, the Martin 000-28EC "Crossroads" is also inlaid with Clapton's signature between the fingerboard 19 and 20 items. The guitar also includes an internal tag and a certificate signed by Clapton and Chris Martin IV to prove authenticity. In appearance, the Martin 000-28EC "Crossroads" is much lower-key than the 000-45EC "Crossroads," and the uncovered head and herringbone are edging to replace the gorgeous abalone. But in terms of feel and tone, it is comparable to Madagascar Rosewood's 000-45EC "Crossroads." The more expensive guitar will generally have a slight acoustic edge, thanks to the retro-style leather structure. Still, this 000-28EC "Crossroads" is better than the same price steel string plane guitar, which is also Due to the limited amount of money, this guitar has been enhanced. In terms of timbre, this guitar has a very balanced, warm, mellow tone and provides impressive clarity when played. In this series of guitars, the 000-28EC "Crossroads" is the most "moderate" and has a very reasonable price. But this guitar can impress the performer with its ability and can also be used as a collection.

As we all know, the 1956 two-color gradient Stratocaster guitar, named "Brownie," was Clapton's first Strat guitar, purchased at the Sound City Musical Instrument store in London on May 7, 1967. When Clapton made his debut with Delaney and Bonnie, the guitar became Clapton's main guitar in the early 70s, and from then on, Stratocaster became Clapton's favorite solid electric guitar. Clapton also used "Brownie" to record several songs from the album "Layla and Other Assorted Love Songs" by Derek and the Dominos, including the album's song of the same name. In addition, the guitar appeared on the cover of Clapton's first solo album, and the guitar that slammed Clapton was "Brownie." In June 1999, Clapton auctioned "Brownie" at the auction, and the final price was close to $500,000.The Fender Custom Shop Eric Clapton "Brownie" Tribute Stratocaster accurately restored the original guitar, including wear, materials, feel, and sound, and the original guitar. The Experience Music Project, the buyer of "Brownie," generously loaned the original guitar to Fender. Under the leadership of the famous guitar master Todd Krause, every tiny detail of the guitar Performed measurements and analysis. Surprisingly, this "Brownie" Tribute Stratocaster is no different from the standard 1956 Strat guitar. The soft "V" neck profile, vintage silk, and lacquer finish on the back of the piano make it feel like a Strat guitar belonging to a great guitarist. The weight of the body is also very light and comfortable. It feels like a piece of eucalyptus over fifty years old. Connect it to the Champ speaker, adjust the pickup switch to the neck pickup and the middle position, and it will sound the same as Clapton's iconic sound in "Layla." The pickups provide sweet sound, warm mid-range, and crisp, impact tones, but without the high frequency of sharp overtones. Because it perfectly reproduces the guitar that Clapton uses, the "Brownie" Tribute Strat is slightly different in size from the original guitar. For example, the Synchro Vibrato system is enclosed, equipped with a hard bridge, and equipped with a more modern five-speed pickup switch instead of the third-generation pickup switch of the 50s. The guitar also comes with a box with "Derek and the Dominos," a certificate signed by Eric Clapton; Fender Custom Shop introduces the booklet for the guitar construction process and the 40th anniversary of the luxury suite "Layla and Other" Assorted Love Songs. In addition to being cheaper than the original 1956 Strat, the "Brownie" Tribute Stratocaster is the most attractive alternative today and is highly collectible.

The "love" of Clapton and Martin 000 series guitars began in the 70s. At the time, Clapton bought many Martin guitars during his tour of the United States. And one of them, Clapton's 1968 000-28 Martin, was converted to Style 45 by Mike Longworth in the 1960s. In 1970, Clapton purchased the guitar at GTR (the predecessor of Gruhn Guitar) in Nashville. Later, Clapton used the guitar in the 1974 "461 Ocean Boulevard" album and the "Nothing but the Blues" tour from 1994 to 1995. Martin 000-45EC "Crossroads" guitar did not re-enact Clapton's guitar but added a few unique features to this new guitar. Notable features include the signature of Clapton between 19 and 20 and the Crossroad logo on the bridge.

Each guitar has a sound hole label and an autographed certificate by Eric Clapton and C.F. Martin & Co. CEO Chris Martin IV. The Martin 000-45EC "Crossroads" guitar is available in two versions: Madagascar rosewood and Brazilian rosewood. If the player pursues pure retro sounds, he should choose the Brazilian rosewood version, which provides gorgeous high-pitched sounds, beautiful overtones, and rich resonance. The back and side panels of Brazilian rosewood are designed for those guitarists who can recognise them. Compared to the Rosewood version of Madagascar, the difference in tone between the two is very subtle. The Madagascar rosewood version offers a very warm midrange and a more prominent tone, making it ideal for playing chords with paddles. These two different guitar models provide excellent performance, the distance between the string pillow and the strings is also very suitable for the finger guitar player, and the positive and sensitive dynamics can meet the requirements of any style guitarist. The Martin 00-45EC "Crossroads" guitar is made in a 1934-'42 format, including a 14-piece neck and snowflake fingerboard inlay, a solid head with a CF Martin logo, and a raised bridge piano made of ebony. Martin also uses retro-style leather to make the guitar, and many classic Martin fans believe that the guitar used in this way is better than the guitar sound in modern production. Each Martin 000-45EC "Crossroads" guitar is equipped with a custom case and guitar strap, and Martin will also provide CITES files for customers who purchase Brazilian rosewood. (The Convention on International Trade in Endangered Species of Wild Fauna and Flora) to facilitate overseas transportation or carrying. Brazilian rosewood version, priced at $49,999; Madagascar rosewood version, priced at $12,999.