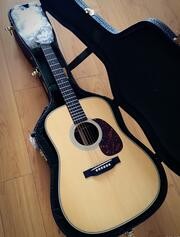 The Authentic series is the highest-end product produced by Martin. It is different from GE MARQUIS and so on. It is produced by CUSTOM SHOP. It is divided into Martin D28 Authentic 1931 and 1941.Why do Martin D28 have these two versions, because it is a product of two very representative eras, 1931 is the first year of Martin D28 guitar, it can be said that it is the first year of D-type guitar, so it should be launched to commemorate. Compared with the 1931 style, the style of 1941 has changed a lot, which is more in line with contemporary people's requirements for guitar, so it is more representative and applicable. For example, in 1931, Martin also refers to the 12-fret connecting body, the neck is also very wide, the head is different from the present, and the model of 1941 is almost the same as the present. 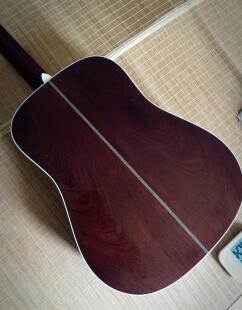 Then let's introduce this Martin D28 Authentic 1941. Due to the new model and the extremely precious AUTHENTIC series, there are a lot of orders and the output is very small, which led me to book this guitar last year and wait until this year to get the guitar. I have forgotten this matter. Suddenly got it, I was overjoyed.This guitar is engraved according to a Martin D28 produced in 1941. The engraving of the AU series is different from that of GE/MARQUIS, and the degree of engraving can be said to be close to 100%. Of course, in addition to the Brazilian rosewood, only the Martin D45 AUTHENTIC used Brazilian rosewood. Replica such as GE/MARQUIS is to reproduce most of the essence of the time. But in general, this is a modern guitar, because many structural things are different from the current year, according to the current production method of the Martin Guitar Factory.

Let's look at the configuration first. The top uses Adirondack spruce, Adirondack spruce's sound beam, Madagascar Rosewood on the back side, Fossil ivory on the upper and lower nuts, and the high-grade mahogany is now available for the neck. Nowadays, most of Martin's necks are no longer mahogany. Waverly's open chords have a fingerboard width of 1-11/16′′, which is the same as the current HD28, but the grip is light V-shaped. This kind of neck now seems to be no other model to use, it is very comfortable to use. At the same time, the diamond cut behind the head is also an old-fashioned shape, longer. The veneer of the head is Madagascar rosewood. At that time, the guitar head was not as square as it is now, and the corners of the head were slightly rounded. Overall, the configuration is very high, and it is all handmade and quality guaranteed.This D-28 AUTHENTIC 1941 is quite special, such as its volume structure, neither the pre-war FORWARD SHIFTED forward structure nor the STANDARD position, but the REAR SHIFTED rear shifted bracing. The difference between them is the center point of the X-shaped bracing, the distance from the sound control, the forward structure, the standard and the backward structure, respectively, the distance control 1′′, 1 1/2′′, 1 7/8 ". These differences will reflect the difference in the tone. At the same time, these three different structures are not just simple distances, but their cutting methods, angles of the sound beams, etc. are all different. The bracing of the D28 1941 is deeper, and the angle of the bracing of the TONE BARS on the panel is more parallel to the longitudinal section of the body. These are the balance of the bass and the overall tone of Martin after the X-shaped keel is moved back. This REAR SHIFTED bracing back-shifting structure was used on Martin's D-type guitar from 1938 to 1944.

In terms of structure, the entire guitar is made of HOT HIDE GLUE, which is leather glue and animal glue. This structure was used by Martin from the very beginning to relocate the new plant in 1964, and then began to use PVA, a chemical glue. However, the bonding position of the panel has been using HIDE GLUE until 1975. Due to the complexity and time-consuming process required to use HIDE GLUE, it must be operated by a very experienced luthier, now only found in the AUTHENTIC series, and some high-end CUSTOM SHOP products.HIDE GLUE is time-consuming and laborious, but it is worthwhile. This technology makes the structure of the whole guitar a natural combination, which makes the guitar more vibrating. As the new guitar gradually opens, the joints gradually adapt to the overall tension and different vibration frequencies, which will make the guitar sound more harmonious, reducing sound dead spots and bad vibration points. Why AUTHENTIC is so expensive is because it uses a lot of such excellent technical structure. If we want to customize a guitar in Martin's CUSTOM SHOP, the cost of using HIDE GLUE is about 1500~2000 US dollars, and the delivery time will increase accordingly.With such a high level of materials and craftsmanship Martin guitar, the sound performance is clearly not disappointing. The overall highlight of the sound of the Martin D'28 AUTHENTIC 1941 is the rich color, the infinitely rich overtones, which are very nice and endless. Unlike the surge of FORWARD SHIFTED, it is relatively balanced. It is neither like the Martin HD-28V nor the Martin D-28 MARQUIS. It is more interesting and connotative.